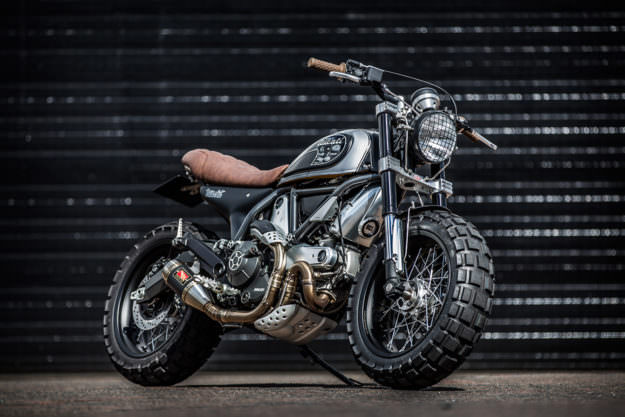 The fat tire look is not everyone’s cup of tea. But if that’s what butters your toast, Down & Out Café Racers are the guys to call.

The British shop has perfected the art of beefing up a bike’s footprint, mostly applying the technique to Triumph Bonnevilles. But builders Shaun and Carl wanted a breath of fresh air, so they decided to give a 2015 Ducati Scrambler the fat tire treatment. “We looked at what other builders at the time were doing,” says Shaun, “and most were building cafe racers around the Ducati.

“After looking at the bike, we decided to keep the bike the original style of a scrambler—with a twist.” Next up was the task of fitting the chunkier front wheel to the bike. Fastec Custom Racing machined a wider set of yokes to stretch the stock forks. They also hooked D&O up with a custom spindle and wheel spacers, and a new speedo mount. D&O then set about giving the Scrambler a nip and tuck. “We were going to cut the rear end of the bike,” says Shaun, “but in the end we wanted to avoid chopping it up—so we can make parts for others to achieve the same look.”

The seat is custom, and doesn’t extend down the sides of the bike like the original does. Instead, D&O have made a set of side covers to fill the space. They’ve also fabricated a new front fender and headlight, with custom-made brackets for both. 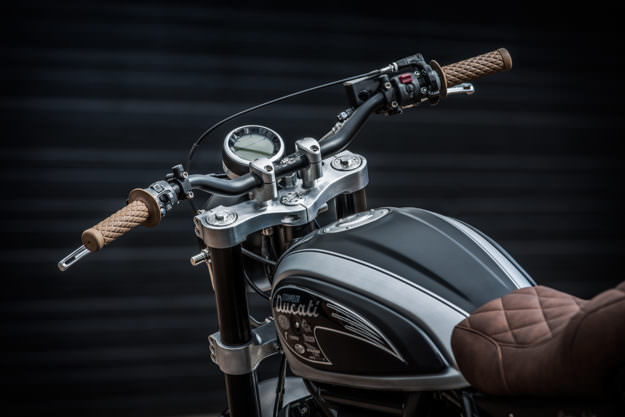 The Italian parts manufacturer Rizoma has a tasty catalog of parts for the Scrambler, and D&O have been busy on the foreign exchange. The air box and cam belt covers, front brake reservoir cap, rear brake reservoir, lower fork guards, chain guard, sprocket cover and levers are all Rizoma parts. There’s also an Öhlins rear shock, and a sump guard and frame plugs from Ducati. The exhaust ‘silencer’ is from Competition Werkes in the USA, and has placed this bike squarely at the top of our ‘want to hear’ list.

The lads tweaked the Scrambler’s wiring too, installed a Motogadget keyless ignition. Prokustom handled the paint, while Moto Demon Speedshop applied the graphics. Is running a 180-wide front tire a little over the top? Probably. But according to Shaun, it’s a blast to ride.

And it looks pretty badass, doesn’t it?