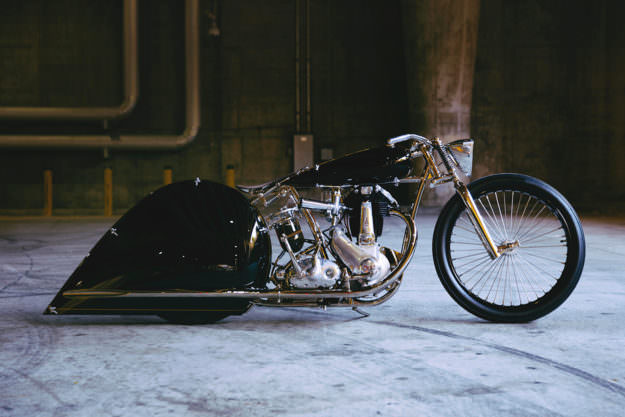 Most successful custom builders operate a production line: Not just bikes, but also hard parts and apparel. They stay afloat on the cash flow.

A tiny handful of builders can take their time, focusing on just two or three projects a year, machines that are labors of love and paid for by clients who appreciate high art as much as horsepower. Max Hazan is one of those builders. Slowly but surely, he’s cemented his position as one of the industry’s most original thinkers and a craftsman of the highest order.

This BSA is his latest meisterwerk, a nod to the past with swooping bodywork worthy of a 1930s Delahaye. But it took time: the 500cc engine sat on a table for over a year, then moved from one side of the shop to the other as Max studied its form and admired its simplicity. 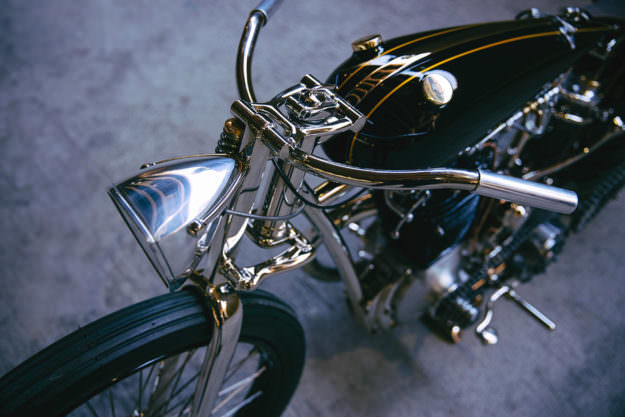 “I usually start the build process with a single part from a motorcycle,” says Max. “But this time it actually started with three pencil strokes on a sheet of paper. It was a shape that I had been drawing for years.”

It was his client, the Dallas-based National Geographic photographer Robert B. Haas, who noticed the 1949 BSA 500 at the back of the shop. He asked Max what his plans were. “I showed him the sketch and said ‘trust me.’” 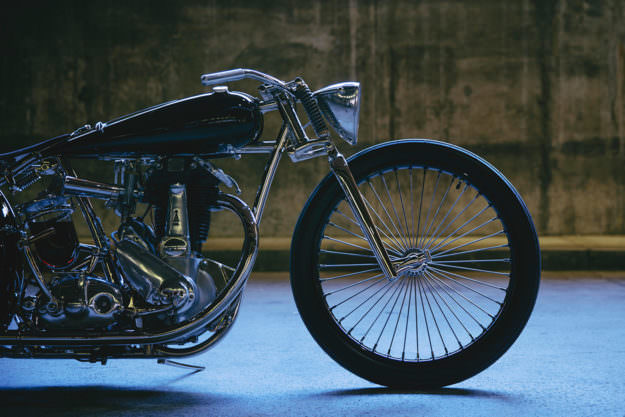 Max developed the elements he wanted the BSA to have: Narrow, elegant styling, and a completely enclosed rear that concealed every moving part apart from the rear sprocket. There was no conscious reference to anything with this build: “I always try to force myself to come up with something I haven’t seen before,” says Max.

“The rear half was one of the most challenging things I have ever done,” he admits. “To make everything seamless, the rear sprocket became the axle as well. The rear hub is actually seven pieces machined from billet aluminum and chromoly.” “I didn’t want to see any part of the rear frame, or have cutouts for the chassis to pass through—but I still needed to be able to remove the rear wheel. So I designed the hub with the sprocket outside the frame.”

The solution is ingenious: There’s a 3-inch diameter axle that can be slid out, allowing the rear wheel to drop out. 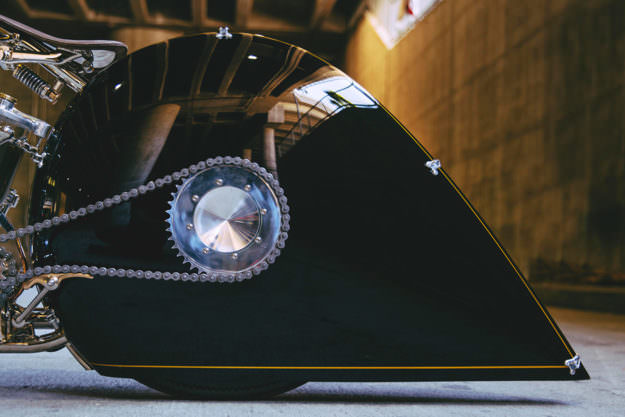 The final drive is also unusual. “I knew that the bike would need some type of jackshaft to line up with the outboard rear sprocket,” says Max, “but I hate the way they usually look. I did my best to come up with a setup that worked well, but didn’t look like a mess and would have an integrated chain tensioner.”

You’d never guess it, but that imposing aluminum rear fender is Max’s first attempt at car-style coach building. “Like most builders, I usually work on parts you could fit in your home oven,” says Max. “So using 50×30″ sheets for each side was a new challenge—and a pain in the ass.” It took him six days and five attempts to get it right. Max ended up lying horizontal on a stool with the sheet on his face, simply so he could reach the pedal of his shrinker. “Most of the initial shrinking was done blind, so there was plenty of scrap made that week.”

The front end of the bike may look more conventional, but it’s equally special. “I try to make a unique front suspension for each bike. This was carved out of 2″ x 1″ steel bars with a bandsaw and a grinder.” All the linkages were made from scratch, plus the front hub, shock and headlight. “I always lean toward ‘minimal and clean,’ so with the exception of the throttle, the handlebars are just for steering,” says Max.

The front rim is a 23-inch in the vintage ‘clincher’ style, and there’s a 19-inch Excel rim hiding under the rear fender. The vintage-style Firestone tires are entirely appropriate for this style of bike. 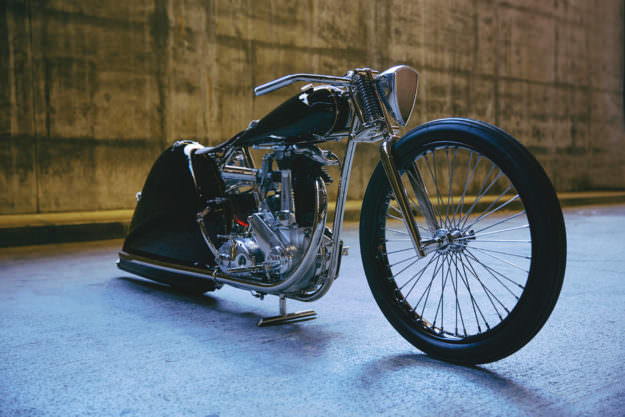 The robust single engine was 85% complete. So Max had to make a few parts that he couldn’t find, like pushrods and oil lines. “Luckily, the owner’s manuals back then were basically assembly instructions, with every single nut and bolt accounted for.

“The engine is incredibly simple. I built it from the bottom up in a day, eyeballed the ignition timing, and it fired up and idled perfectly. Once in a while you just get lucky!” “I have no idea what power it makes. It was a race engine before I bought it, with bigger valves and a little head work, but I’m not worried about the front coming up and scraping the rear fender on the ground!” We see some unusual materials being used on custom bikes these days—wood is definitely making a comeback—but Max’s BSA steps things up a notch by using Pyrex heat-resistant glass for the oil tank.

“This isn’t the first Pyrex oil tank I’ve made,” Max reveals. “And it was actually the last of three tanks I made for this bike. The first was brass and the second was aluminum, but neither fitted the look of the bike. 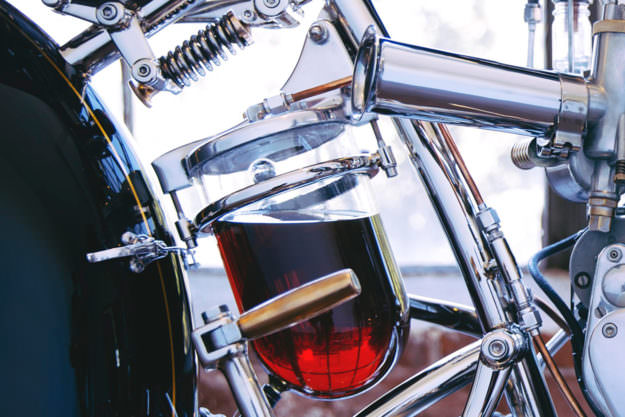 “When I went this route I knew there would be plenty of talk about the durability, but the last one held up well. I’ve yet to see a paint chip on any of my oil tanks, so I decided to go for it.

“It’s rubber mounted and pretty tough stuff. Can it break if a rock hits it? Yes, so I’ll just be careful when I take it off-roading.”

The shield-shaped headlight bowl hides a pair of six-volt vintage General Electric bulbs; the taillight is a virtually invisible strip of six-volt LEDs flushed into the backbone of rear fender. Max is honest about the riding experience: The BSA rides and sounds like an old tractor. But despite the heavy-looking rear end, it only weighs 315 pounds (143 kilos) dry—about the same as a KTM 690 Duke, although the comparisons obviously end there.

This machine doesn’t have ABS, riding modes or traction control. In a world governed by electronics, it’s strangely reassuring to know that there are guys who can still shape metal the traditional way, by hand and by eye—and create objects of timeless, enduring beauty that cannot be bought with the click of a mouse.