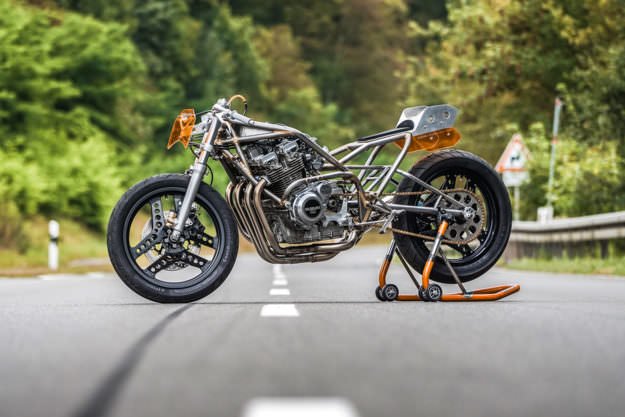 We’re the first to admit that many of the bikes we show are not particularly practical. But this is probably the most bare-bones machine we’ve ever featured—with no bodywork, a tiny tank and the most vestigial of seats.

For once, roadworthiness doesn’t matter. Built by the Berlin-based workshop Berham, this skeletal machine whipped the ass of several factory-backed entries at the Glemseck 101 festival a few days ago, taking home the coveted Sprint International trophy. 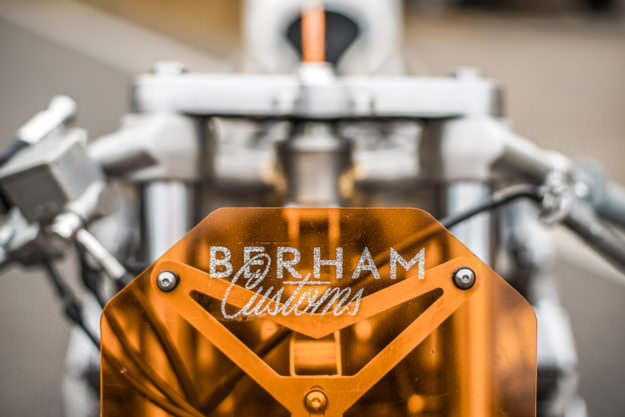 Just sixteen builders were invited to race in Glemseck’s famous ‘Poets Of Sprint’ series. When Berham main man Martien Delfgaauw got the prized invitation, he knew exactly where to start the build: With a genuine 1984 Harris frame owned by his partner Felix Pilz.

Twenty years, ago Felix had bought the frame from a former Harris dealer. “Back then, no one was really interested in special aftermarket frames,” says Martien, “because the factories had started building frames that could handle powerful engines.” 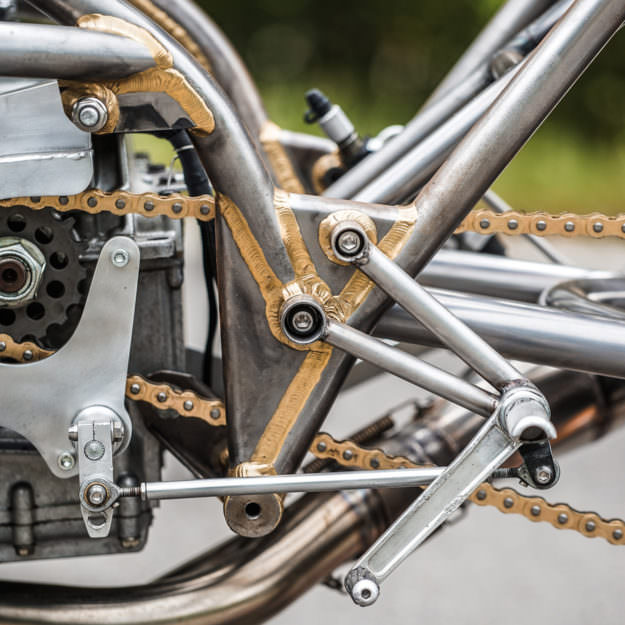 Unfortunately this ‘Magnum 2’ frame was constructed to carry a Kawasaki Z1000 engine. But Berham’s engine of choice was a Suzuki GSX1100 mill—dating from 1981, but in great condition. So the first challenge was to build the mounts to fit in the engine. 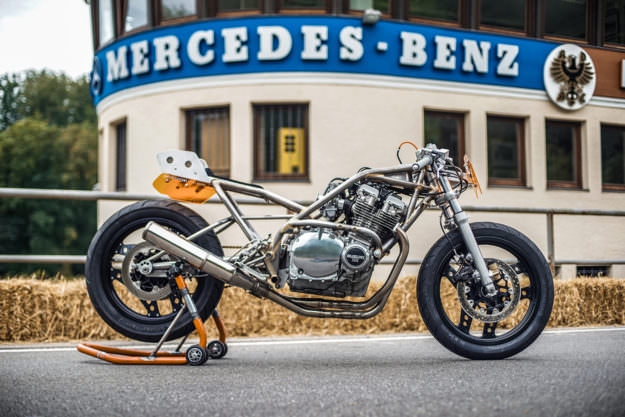 Then a set of shortened Suzuki GSX-R750 forks was installed, and metal magician Marvin Diehl of KRT Framework built a lengthened swingarm. The wheelbase and stance were now right for the drag strip.

The frame rolls on a set of modified Honda Bol d’Or CB900 F wheels—chosen for their style and low weight—with some mechanical trickery to make the brakes fit. 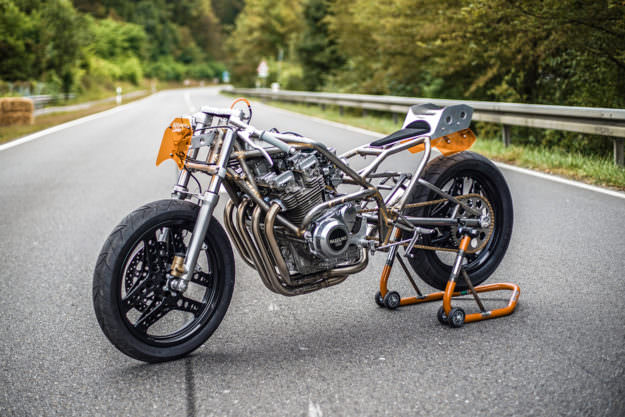 Then word came in that the competition was going to be intense. Triumph was entering a supercharged Thruxton R ridden by Carl Fogerty, the former World Superbike racer. The Suzuki Deutschland/Hans Muth ‘Fat Mile’ would be lining up. And BMW factory test rider Nate Kern and motocross racer Caro Fitus would be there too.

“Little by little, we realized that we might be cannon fodder for the factory teams,” says Martien. “However, that boosted our enthusiasm. We added working hours instead of money, and went for light weight.” 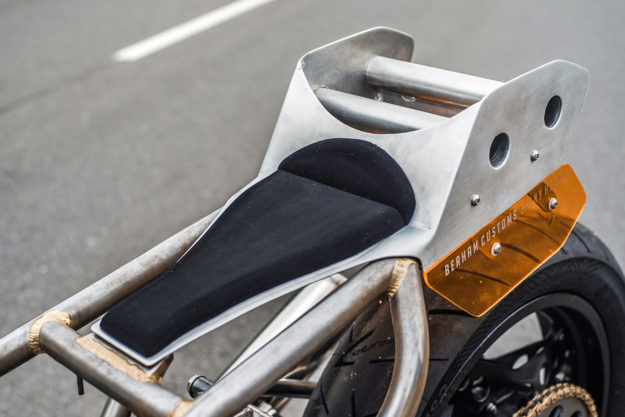 The starter motor was binned, replaced by a pair of push bars behind the seat. A featherweight lithium-ion battery replaced the alternator. The rear shocks were swapped out for stainless steel pipes.

Berham even built an aluminum tank with just 1.5 liters (50 fl. oz.) capacity, and turned down all the fasteners on a lathe to save even more precious ounces. The result: A total weight of just 168 kilos (370 pounds). 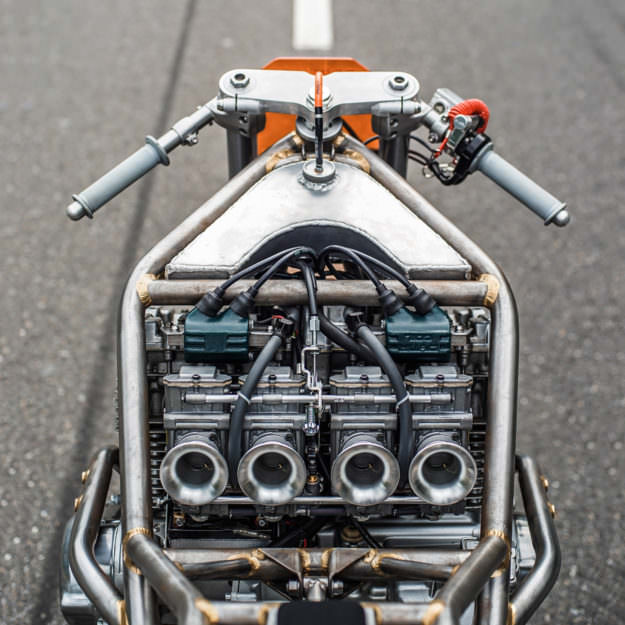 To add some spice to the engine, Felix mounted a GSX750 intake camshaft, Mikuni flat side carbs and an exhaust system built by grandmaster Schüle. “We didn’t have a chance to dyno it, so we have no idea how much horsepower or torque it actually produces,” says Martien.

But after test rides, Martien and his crew realized that their bike was very schnell. “We never expected that the old Harris slogan ‘We win races’ would come so true, though.” 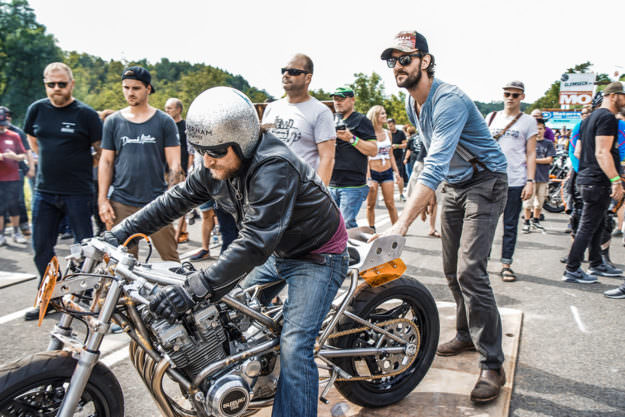 The final came down to Shiny Harry versus the Bandit 1250-based ‘Fat Mile.’ And Harry won.

Maybe it’s the frame’s way of thanking the Berham boys for resurrecting it after 32 years? 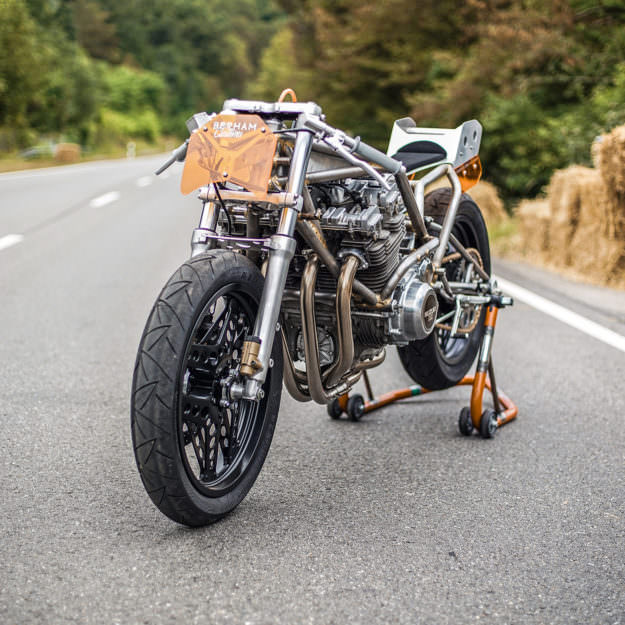 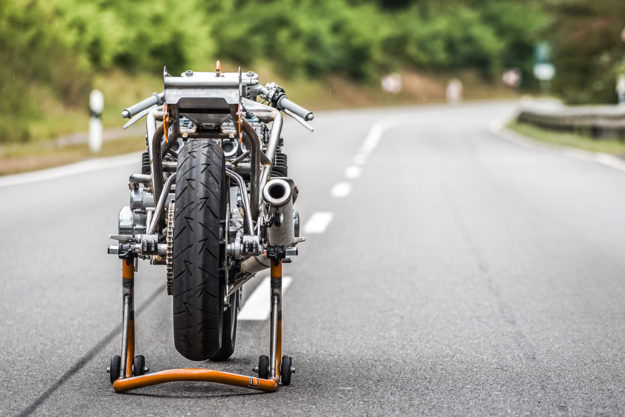