Velfjord is a pretty little town of red-painted houses in Norway—a winter wonderland surrounded by mountains, fjords, lakes and forests. It’s also incredibly remote, being a five-hour drive from Trondheim, the nearest city.

This is the land of the midnight sun, just south of the Arctic Circle. It’s also where Roel Scheffers builds incredible custom motorcycles inside his cosy, wood-paneled workshop. The Dutch photographer Mark Meisner flew to Trondheim to find out more about Roel, his expatriate countryman. And the trip was worth it to see this heavily modified Yamaha GTS alone.

Roel bought the GTS 1000 around four years ago, while still living in Holland. Dating from the mid 90s, it’s one of the most complex bikes in the Yamaha archives—with electronic fuel injection, ABS and a radical front suspension system. Developed by the American James Parker and superficially similar to hub centered steering, the GTS 1000 uses a single-sided swingarm, a coil-over shock and a telescopic steering column.

After riding the GTS home, life got in the way for Roel. He found himself with a wife, a child, a move to Norway and then another child. After settling down on the outskirts of Velfjord, he could finally get started on his tenth custom build. He wanted this bike to ride low, with rear suspension to match the single-sided front end. So he’s grafted on the swingarm of a Honda VFR 750, and installed a short Buell ‘pull shock.’

It lives close to the ground underneath the engine, hooked up via a custom link system. “It’s out of sight, and the space beneath the seat is now much cleaner,” says Roel. It’s not just the suspension that’s symmetrical: the wheels are too. The front wheel is now a clever hybrid, blending elements from Honda NSR150 SP and VFR750 wheels. The center of the hub is outside the rim, so Roel had to mill the edges of the rims. After a little realignment and welding, and mods to the steering column, it all fitted.

To keep the bike low—a mere 32 inches high—every available space is filled with relocated parts. The radiator sits between the front suspension and the engine, and the oil cooler has been modified to sit beneath the front swingarm. The engine isn’t stock either. The original 100 horsepower mill now earns its living as a coffee table, because Roel has squeezed a 136 horsepower FZR1000 engine into the GTS’ frame.

The carbs have been tickled with a Dynojet kit and homemade velocity stacks, and gases now exit via a custom exhaust and a tweaked muffler from IXIL. It took three goes to get the gas tank and seat unit looking right. They’re made from aluminum, with separate vessels inside the tank for gas and oil. The electronics and battery pack live behind the seat—which was upholstered by the Dutch specialist Marcel Miller.

The cockpit is empty, with nothing to distract the rider. “You have to look underneath your left knee to see how fast you are going!” says Roel. On the right of the bike, concealed just below the seat, is a small aluminum panel for controls such as the light/power switch and starter button. 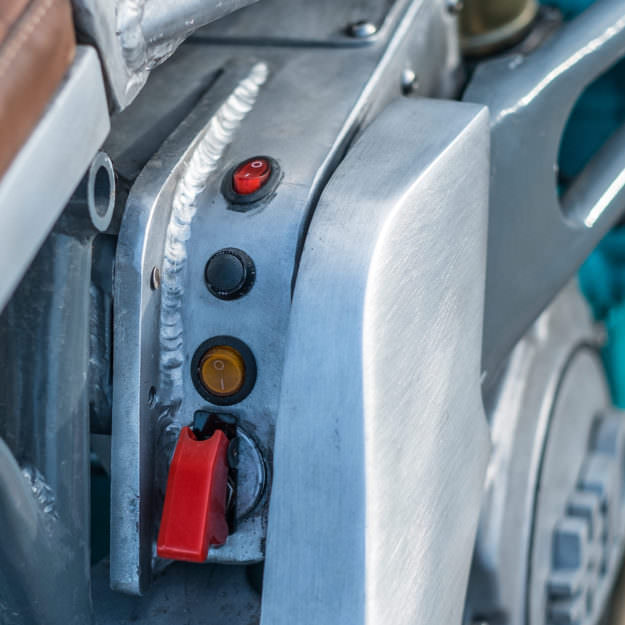 We’re blown away by the engineering and creativity of this build. Especially since parts are hard to come by near the Arctic Circle.

“Norway is a big country, but rare parts are hard to find—or very, very expensive,” says Roel. “So eBay is a good friend of mine. And when friends and family visit, they get a list of parts to bring!” He’s got a lot of machinery in his garage, but he can’t CNC parts—so a relative handles those jobs. The wait is two around weeks.