Customizing bikes is all about seeing potential. Case in point: this cute little ’92 Suzuki GN250 from Portugal’s Dream Wheels Heritage.

Back in the day, the GN was the go-to bike for riding schools and the Portuguese postal service. But this one’s been resurrected as a neat-n-tidy café racer, for delivering smiles around the island of Madeira. Dream Wheels’ client specifically wanted a bike with a traditional café look—but it’s the impeccable execution that has us sold.

Take a look at the beautifully matched upper bodywork, for example. The tank has been adapted from a Sachs Lotus Special V5—a 50cc Portuguese bike made in the 80s. The seat hump is actually a removable hand-made cover, with passenger accommodations below. It’s perched on a custom-made subframe, with a discreet LED taillight built into the seat pan. The front fender and rear license plate bracket are hand-made, as is the new battery box. There’s a new gel battery in there too. For the exhaust, Dream Wheels combined two EMGO mufflers—connected to the headers via a one-off branch. The GN250’s also had a serious under-the-hood refresh. The engine’s been rebuilt from the ground up, and treated to a fresh coat of paint. Smaller items—like the brake lines and fork boots—have all been replaced. There’s a set of Showa shocks out the back, taken off a Honda CB750. The front forks have been dropped a little to adjust the stance, and the 18” front and 16” rear wheels are running Avon Safety Mileage MKII tires. Up front is a set of clubman bars, kitted with Biltwell Inc. Kung Fu grips. The headlight is classically styled, but LED-equipped. There’s a new mini-speedo too—wrapped in leather, with a vintage Portuguese escudo coin embedded in the side for luck. 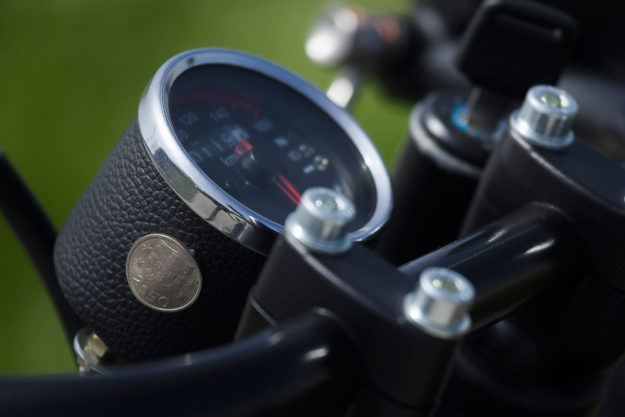 It’s a timeless aesthetic, finished off in an equally timeless color. Dream Wheels picked Mini Copper Hot Chocolate for the paint reference. It’s been done in a matte finish with gold touches—including the owner’s luck number, 19. “We see a lot of custom bikes with this base,” Dream Wheels’ Hélder Moura tells us. “It is cheaper, and has simple mechanics.”

“But we think that we improved it, and moved it to another level.” From forgotten delivery bike to perfect Mediterranean runabout… sounds like a pretty big improvement to us.