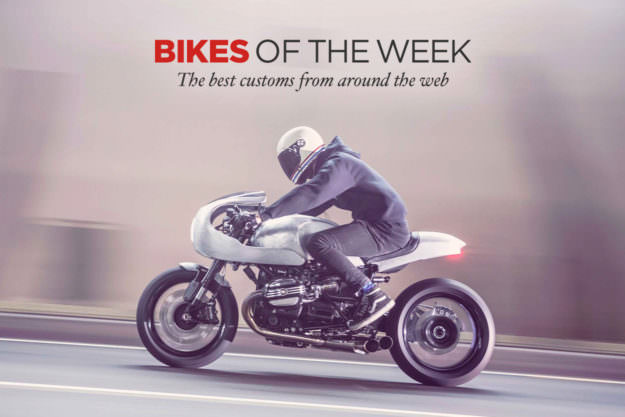 A tuned Thruxton from the bonnie banks of Loch Lomond, a super-sleek BMW R nineT from Australia, and the Indian that’s going to shake up flat track racing in 2017. It’s all about speed this week. Triumph Thruxton by White Crow Customs After the release of Triumph’s newest twins, I keep wondering when the pipes will run dry on air-cooled builds. Thankfully, folks like Glen and Colin from White Crow Customs have kept the taps on, for at least another week.

The boys from Loch Lomond, Scotland have transformed a 2006 Thruxton from a lethargic lump to a cafe that can race. The bike was put on a 25 kilo diet, aided by a svelte new Kawasaki Z250A tank that needed some cutting and stretching before things would fit. To show off its slender proportions, White Crow also cinched the rear frame rails inwards, to allow the one-off seat and tail unit to hide them completely.

To help this Hinckley twin hunt and peck, the powerplant was ported, high flow Keihin CR flat side carbs were fitted, and compression was bumped up. (Gases exit via a reverse-cone exhaust made in-house.) This Thruxy now runs with the best of them and announces its intentions from miles away. [More] 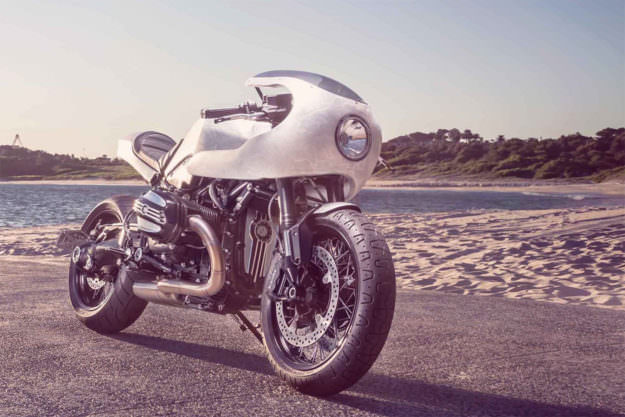 BMW R nineT by Gasoline Motor Co. Trying to capture a brand’s design history and predict its future in a singular build is no easy feat. It helps when you have a donor bike that already straddles that line quite well—but the folks at Sydney, Australia’s Gasoline Motor Co. have taken the R nineT to a whole new level.

Working with aircraft grade 6061 aluminum, every piece of OE bodywork has been replaced with with handcrafted units. The tail, cowl and front fairing were all formed ‘one curve at a time’ before their raw finish was sealed by a matte clearcoat. The boxer’s breastplate is a Roland Sands Design unit and the LED taillight resembles something from Tony Prust’s workshop.

My favorite touch though, is the custom exhaust set-up with its under-mounted muffler. The system does an excellent job of showcasing the cleanliness of the R nineT’s rear—along with the beauty of a single-sided swingarm. [More] 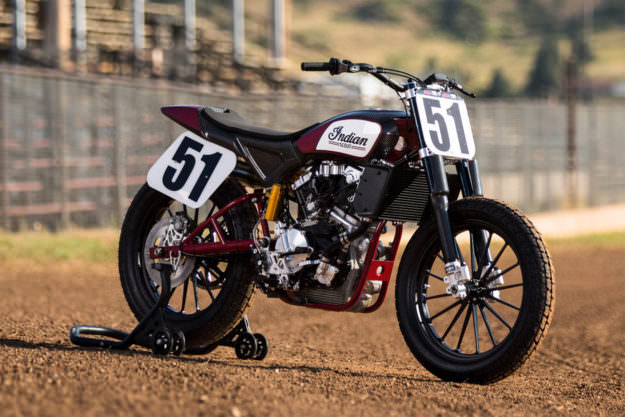 Indian Motorcycles FTR750 Flat Track Racer Need further proof that the flat track scene has made a resurgent comeback? Look no further than the Indian FTR750.

Packing a race-prepped, four-valve and custom-built engine underslung by a newly engineered frame, the FTR750 looks to bring back Indian’s Wrecking Crew days. Released at the recent Sturgis motorcycle rally, you can expect to see the FTR750 during shakedowns at select events this year—with the aim to run flag-to-flag in 2017’s AMA competition. Nostalgists in our crowd will note the number plate on this bike: 51 is a tribute to Bill Tuman, the last Indian rider to notch a Grand National Championship. [More] Honda CB77 by Oni Motorworks The Honda CB77, better known as the Super Hawk, is credited with starting the watershed moment for Honda in the Western world. Its stressed member, 305cc parallel twin revved freely to 9,000 rpm—and could easily show taillights to the larger displacement Triumphs of the time.

It’s also a rare bike nowadays. So finding one that’s been so dutifully fabricated as this 1961 model, at the hands of California’s Oni Motorworks, is a treat.

Len Higa, the man behind Oni, grew up watching his brother work on cars in their Hawaiian home and the bug bit quickly. After a number of trips to Cali to watch and compete in drag races, he found himself working as a fabricator for Team Papadakis. The skills he picked up there obviously paid off: Almost everything about ‘Little Racer’ has been hand crafted.

The tank and tail deliver a slender singularity to the design that nails the original ethos of the cafe racer. [More]