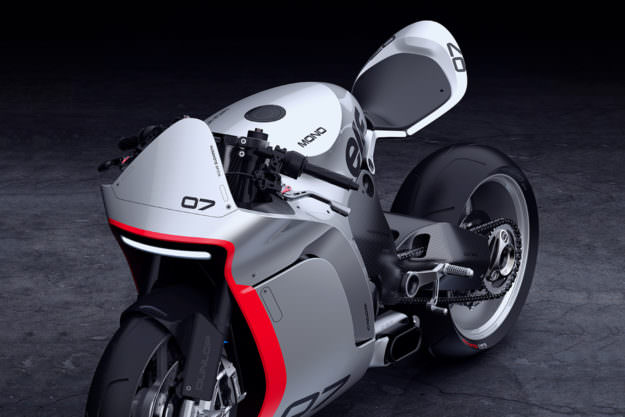 The San Francisco-based outfit is now tackling its most ambitious project yet: a complete, ground-up concept motorcycle, called MONO RACR. Even though we normally feature physical motorcycles that can be touched and ridden, this is a remarkable and unusually intriguing concept. So we squeezed Bill for a full look at it, and a glimpse into Huge Moto’s thought processes.

What’s the idea behind MONO RACR? 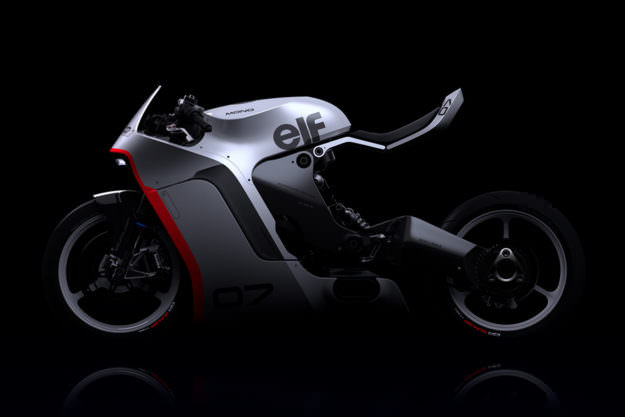 What did you base it on?

This virtual bike build began with one crucial component as a starting point: a Honda 1000cc inline four-cylinder motor. From there, every component was carefully considered, designing from the inside out.

Both the mainframe and swing arm are designed to be a mono-form carbon fiber construction, for added weight savings and performance. Our goal is to make this bike as real as possible—and not just another bullshit concept bike. We’re currently exploring fabrication options to make MONO real. 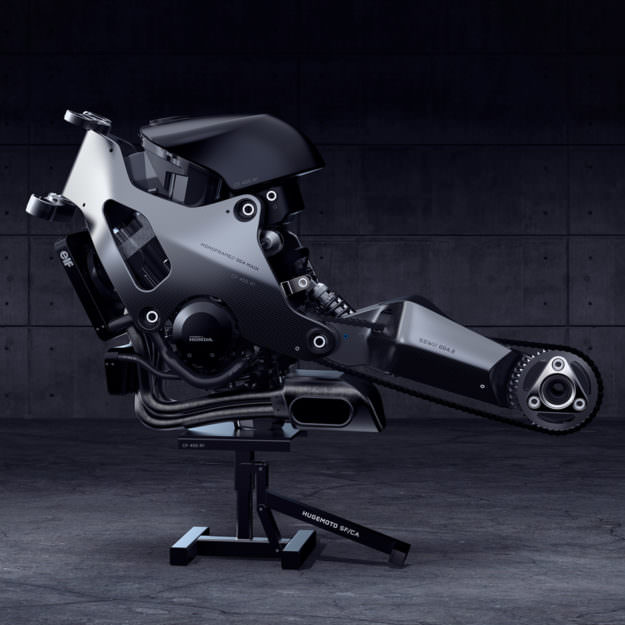 What was your frame of reference when designing the chassis?

We started with the idea of a futuristic carbon fiber frame and swingarm, which matched much of the track-proven hard point dimensions on race and sport bikes. We focused on the relationship of the frame to the motor and other significant components.

We tried as much as possible to learn from existing bikes and not re-invent the wheel on every component. Once we had a frame design we liked, we started laying out everything as efficiently and intelligently as possible—knowing we wanted to end up with a very clean, curvature continuous outer fairing design that would hug the hard bits. 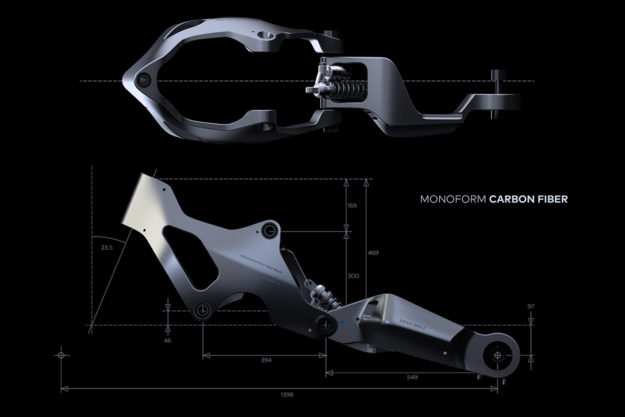 How did you arrive at the retro-futuristic design of the bodywork?

Once we had a basic ‘virtual rolling chassis’ we focused on trying to come up with a design that could stand out from current sport bikes, for its design consistency and ‘clean’ aggression.

I think this is where the retro-modern aspect comes in… and what we found is that this was the biggest challenge to do without sacrificing function or performance. Once you account for all the same functional constraints as Ducati, Honda, Yamaha, etc., there isn’t much left. So it ends up being a difficult, or subtle, design exercise. We don’t like all the crazy, over-designed elements that seem to get more pronounced year to year with the current crop of sport bikes. So we needed a bold, simple design element that could be a flexible theme that could pull the whole bike together visually.

So we came up with this idea of an angled vector line. The side view of the bike is comprised of these repeated design lines from front to back. This style of line works well with the constraints and ergonomics, and gives a ton of classic character without being too ‘mountain dew’ design. 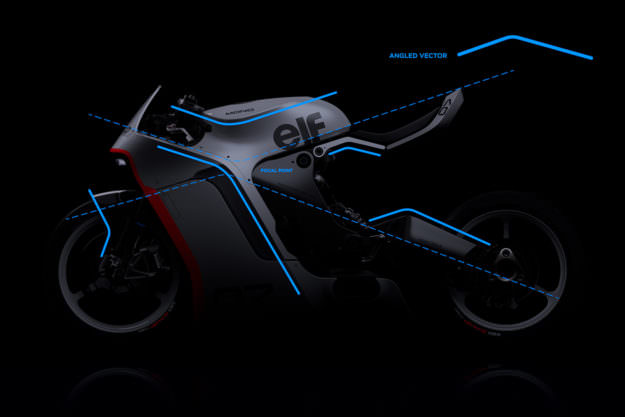 How did you test everything virtually, to make sure it works in reality?

The short answer is that we haven’t done that yet. I had some engineering help with the few elements that aren’t already ‘proven’—namely the carbon fiber frame and swing arm.

The reality is that a full carbon fiber frame and swing arm is a huge challenge that the big manufacturers and MotoGP race teams are in the process of figuring out. So how far is the MONO RACR from being a reality?

In terms of the industrial design process, I would say that this is at the stage of a refined concept, taken to about eighty percent real.

So that decision-makers can decide whether or not it is compelling enough to create a fully staffed team of engineers, to figure it out and tweak it into a final product. A realistic concept at an auto show to gauge interest, to put it another way. A few of these renders had us doing a double-take…

People love Bike EXIF for the craftsmanship and the gritty reality of the bike builds. We didn’t want this bike to come across as some crazy neon bullshit, so we tried to present the bike and all the detail shots in a style that mimicked the garage-slash-warehouse environment of many builders.

So what happens next?

We’re hoping to drum up excitement see if there is interest in helping fabricate this. The carbon fiber frame and swing arm, for example, would be a huge challenge on its own… so maybe we could substitute aluminum and make something close. 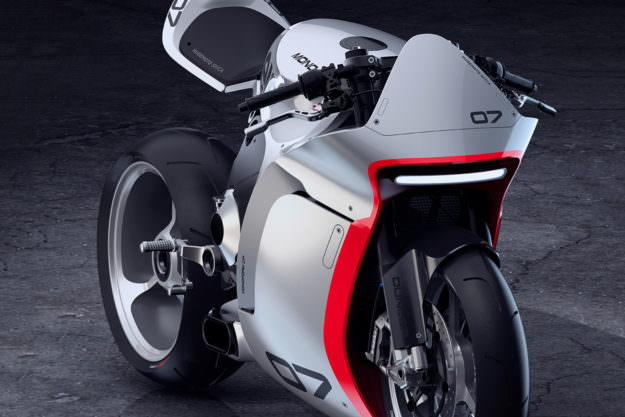 Huge Moto is a side passion—our day jobs at Huge Design keep us busy. Huge Moto/Huge Design will be moving into an all new shop facility in downtown San Francisco within six months, with more machines and tools, and more capability to prototype bikes. 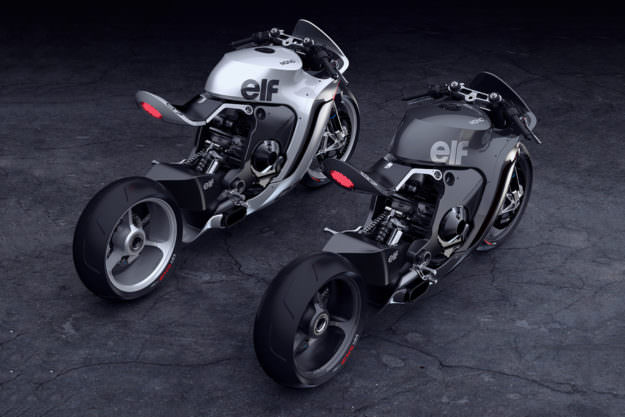