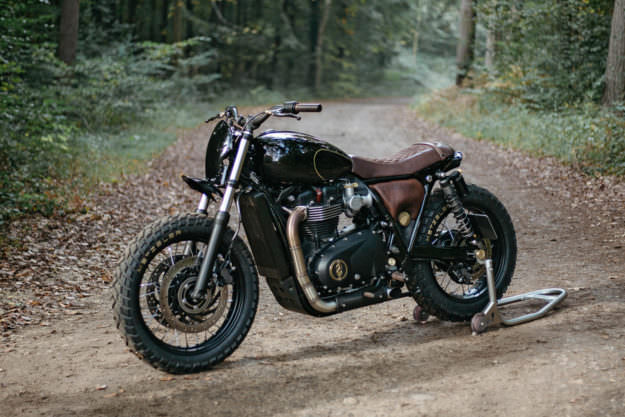 There’s something quintessentially English about Old Empire Motorcycles. The quirky name is matched to an instantly recognizable signature style; you can spot an OEM build just like you can spot a Wrenchmonkees or Classified Moto bike, but the style is almost impossible to emulate.

Alec Sharp and his crew are based in the old Norfolk market town of Diss, which is in the middle of nowhere literally and geographically. Yet they’ve made their mark in all the right places, with bikes exhibited in Harrods and the Saatchi Gallery, and ‘best in show’ trophies from the Salon Privé concours in 2014 and the Malle Mile in 2015. 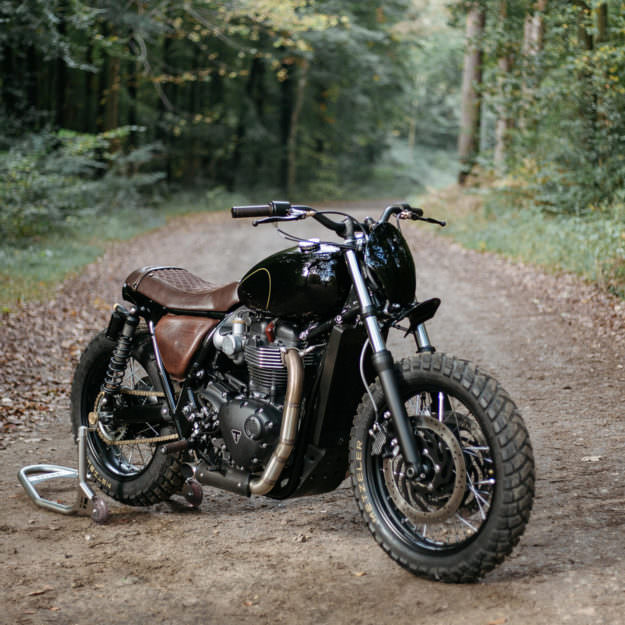 Not surprisingly, OEM are on the radar of the major manufacturers. “We’ve been approached a few times,” Alec says. “But the way we build—mostly from little or no visual reference—makes it difficult to convince companies to just ‘leave it to us’.”

“But as we turn out more and more bikes, the trust gets stronger and the decision gets easier.” 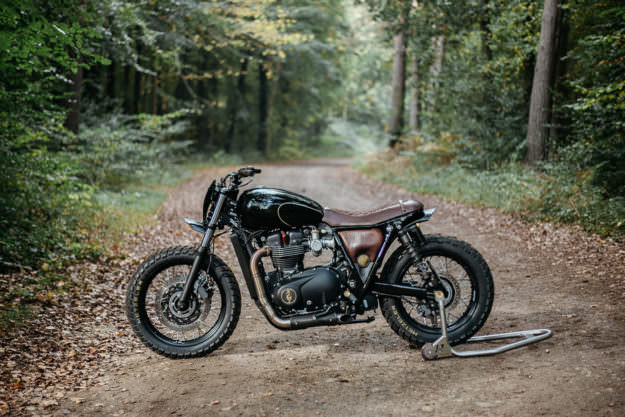 OEM starting talking with Triumph in early 2016. After many phone calls and trips to the Hinckley HQ, the lads had a loose brief. The idea was simple: Create something to catch attention at the shows Triumph attended. The bike also had to be rideable.

“Styling wise, the only thing we both agreed on was: No low bars, and not too café racer.” A brand new Bonneville T120 Black was duly dropped off at OEM headquarters. “We were quite impressed, it sounded better than the older models, performed better and, most importantly, felt like it had more character—not something we often say about a new motorcycle!” 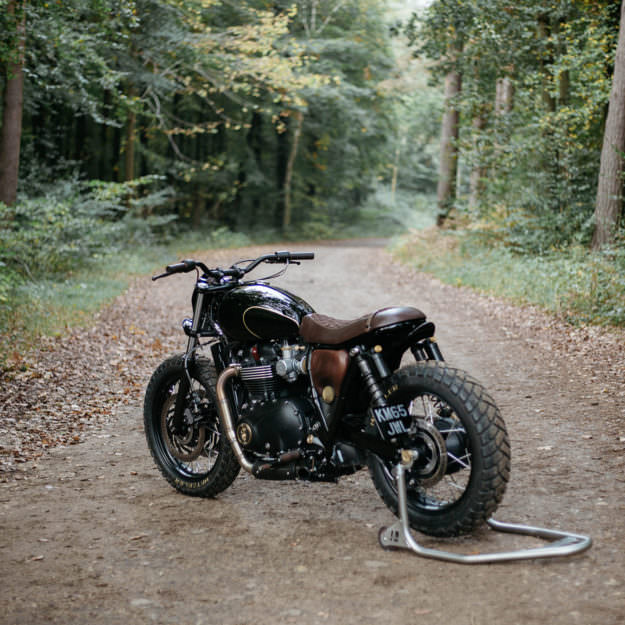 Triumph has done a sterling job in creating a production motorcycle with heart, but OEM decided to push it further. They also wanted a slight nod to Steve McQueen’s off-road Triumph racers, with a back-to-basics vibe and all the non-essentials removed. (“Quite troublesome with a newer bike like this,” Alec says wryly.)

After stripping the bike down, OEM tweaked the stance by taking a couple of inches off the fork tubes and installing a custom-made set of fully adjustable Fox Podium RC shocks. While they were out, the forks were also spun in the lathe and the front fender brackets removed. 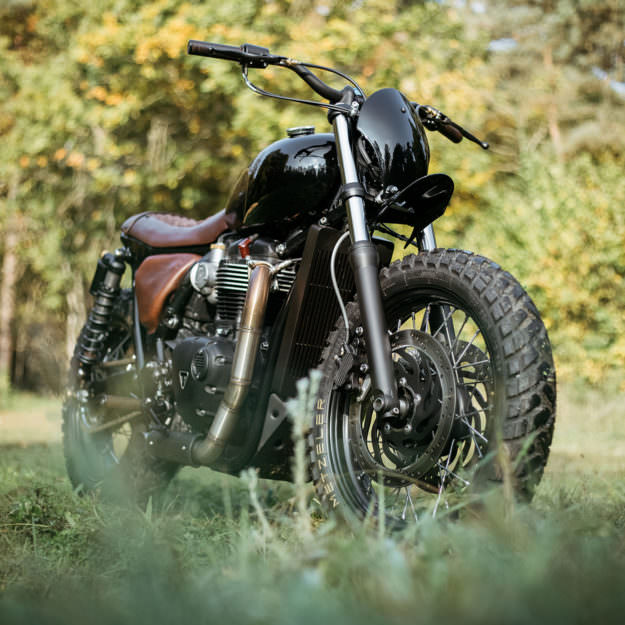 Then it was time for detail work. The brake calipers now have subtle old-school fins machined into them, and the centers of the brake discs have been machined to give the illusion of floating discs. (“Something we would have liked to install, but as with most projects, the budget did not extend that far.”)

Serious thinking was required when it came to the ‘electrickeries.’ The instruments are linked to the ECU, which cannot be ‘flashed.’ On many bikes, parts of the ECU can be switched on or off—allowing the removal of the speedo unit or immobilizers, for example. “But Triumph’s new ECUs are factory-protected to stop tampering or flashing, which severely limited our options.” 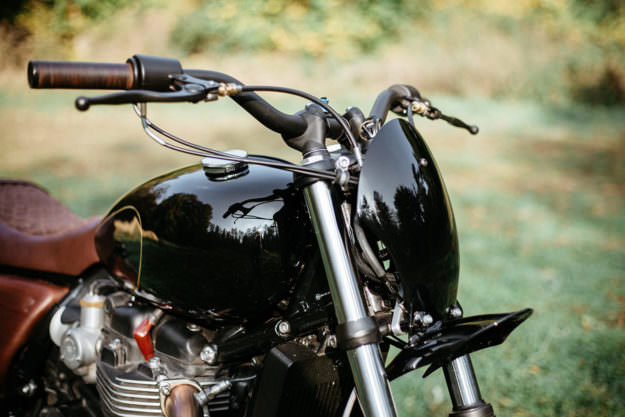 Plan B was triggered. The instruments were removed—but the relevant circuit board was left intact, and remounted in a sealed aluminum box under the engine. The stock controls were ditched too, along with the levers and bars.

On went customized risers, Renthal Fatbars, and a set of OEM’s own control units with integrated levers. Installing these button-less switch cases tallied with the idea of removing absolutely everything possible: There are no lights or blinkers, but the bike is still eligible for a British ‘daylight MOT.’

OEM have also modified the fly-by-wire throttle setup, installing it in a remote housing located under the engine and linked to a traditional twin-cable push/pull set up. 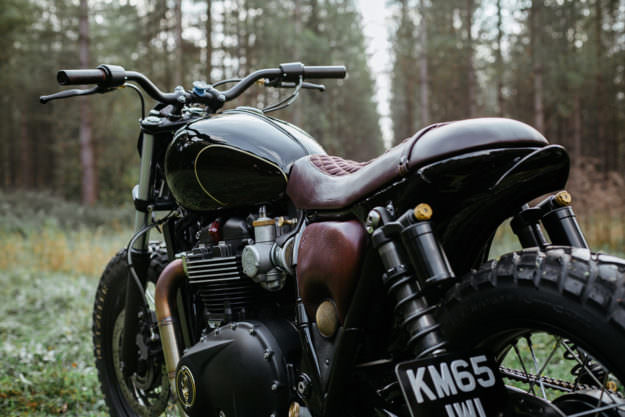 The way Triumph hides Bonneville fuel injectors behind Amal carburetor-style housings is controversial. But we don’t mind it—after all, even fuel tanks are ‘fake’ on some bikes—and neither do the lads at OEM. They’ve extended the effect by adding a pair of velocity stacks, carefully shaped to fit over the intakes. They’re filtered with mesh, and clamped on with old-school Jubilee clips.

“Vinyl-covered alloy panels hide the rest of the injection unit, and we installed a brass ‘pull starter’ and inserted some dummy cables running under the tank. I think the imitation is complete and very difficult to spot!” 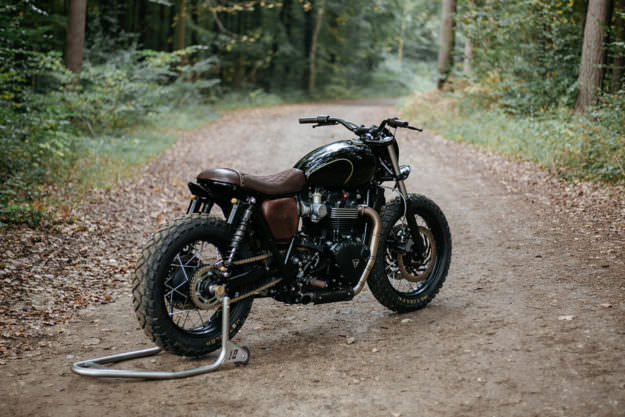 On the tinware front, OEM knew they had to keep it simple and classic. So they’ve fitted a 1964 Triumph Bonneville T120 American import tank, and a couple of stubby, ribbed aluminum fenders.

“The tank took some fettling. We gutted it and TIG welded (with silicon bronze) a new ‘inner’ to mount the humongous fuel pump. We tried to leave enough room for a couple of liters of motion lotion, and got 10 in the end.” 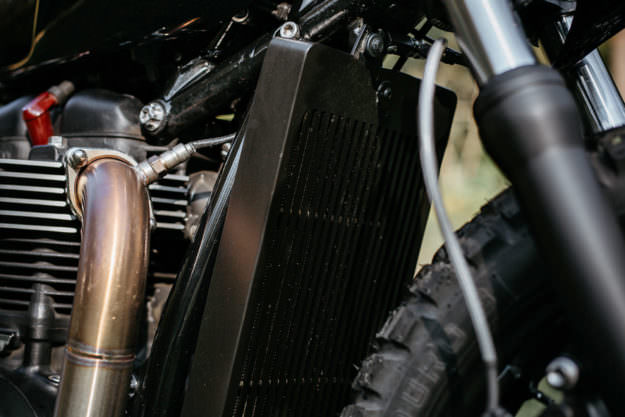 A stainless steel radiator shroud became one of the last items to be metalworked. “Rolls-Royce-esque is what we were going for,” says Alec. “It leads down into a thick aluminum bash plate, which covers the speedo box, reg/rec, and the fly-by-wire throttle unit.”

That space was kindly vacated by the old cat and exhaust system, allowing OEM to rethink the setup. “It had to be loud, really loud, and aggressively styled—but functional too. So we cut some beefy two-inch stainless pipe, and welded in sections to get just the right shape to tuck under the side casings and flick out under your foot. Our own cone baffles take the edge off, but not too much.” 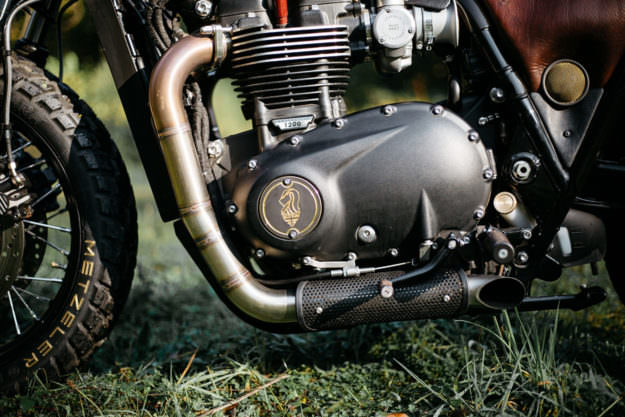 A quick shortening of the rear rails and loop reduces the length of the bike, with a new aluminum seat pan slotted in seamlessly. The seat was built up from layers of different density foam and topped with beautiful grained brown leather and dark brown ‘suede.’ “It’s actually luxury dog bed material—100% waterproof!” Alec reveals. 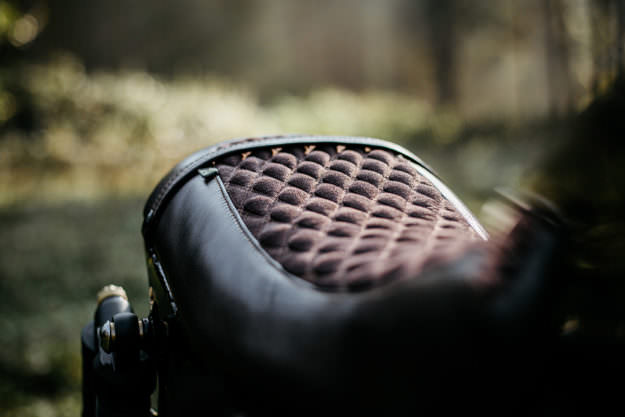 Other leather bits include OEM’s signature dark brown grips and pegs, all machined, dyed and polished to match. The side covers are new too, formed from plywood using the airbox as a mold, with wet leather pressed on and baked stiff. The velocity stack on the left side is the new intake into the airbox. 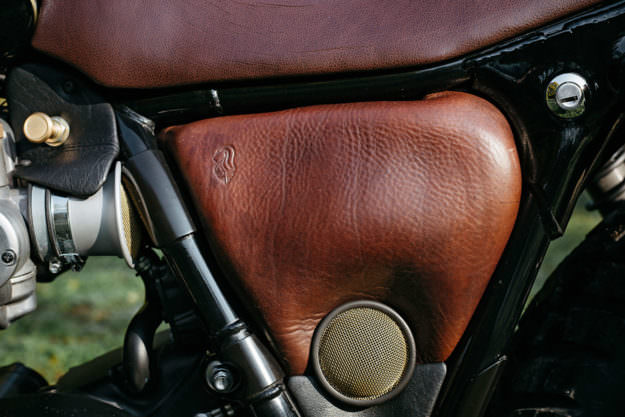 The cherry on the top is the new mobile dash display. It uses the Torque app available for Android phones, and reads a Bluetooth sender unit plugged into the ECU. Information such as speed, revs, and temperature is transmitted to OEM’s own custom dash display, complete with Smiths-style ‘chrono clocks.’

“We can even put lap times, a trip odometer and sat nav through the system,” says Alec. “It should be compatible with any motorcycle featuring an OBD port. And although it’s a bit of a novelty, we are developing it further.” 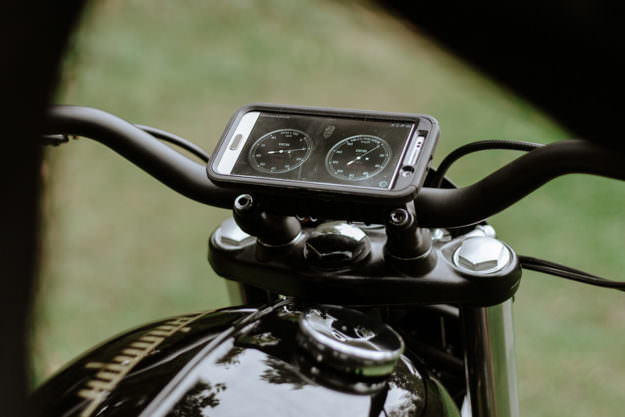 “If it had not been for a certain Willy Valentine, this idea would not have been thought of—so a big man hug to that man!” (The theme is available on Google Play as the ‘Old Empire Classic Dash’ theme, which requires the Torque app to run.)

After all this high tech, it’s a relief to see a simple, clean paintjob: Glossy black with gold highlights, applied by Greg at Black Shuck. The hard parts have been treated to a matching but slightly chalkier ‘armor black’ ceramic Ceracoat, skillfully applied by Simon at Flying Tiger Paintwork. 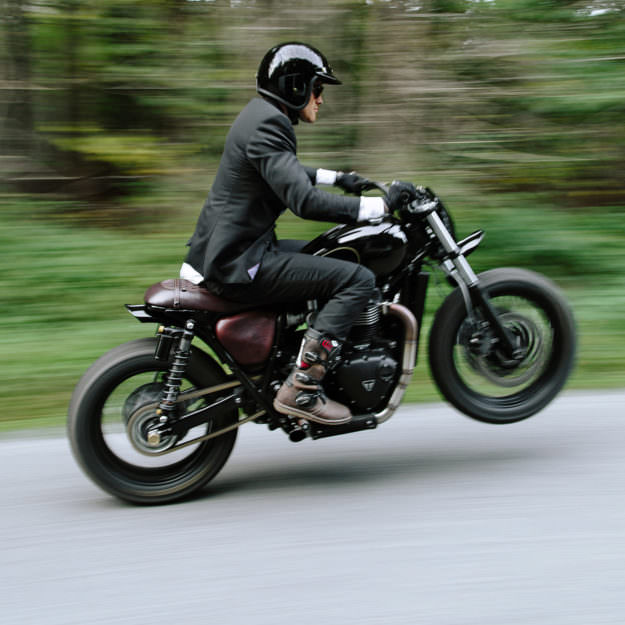 The result is as classy as a Paul Smith suit: A beautifully constructed traditional style with a discreet modern twist.

If there was ever the motorcycling equivalent of a bespoke three-piece suit from a Saville Row tailor, this is it. 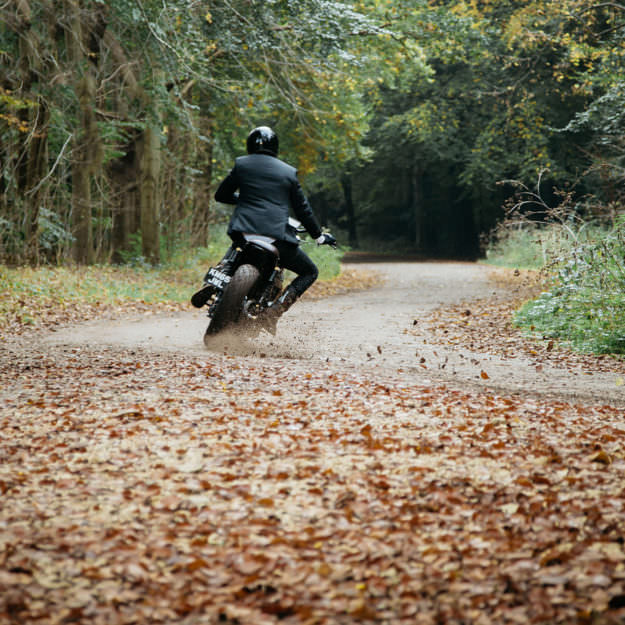