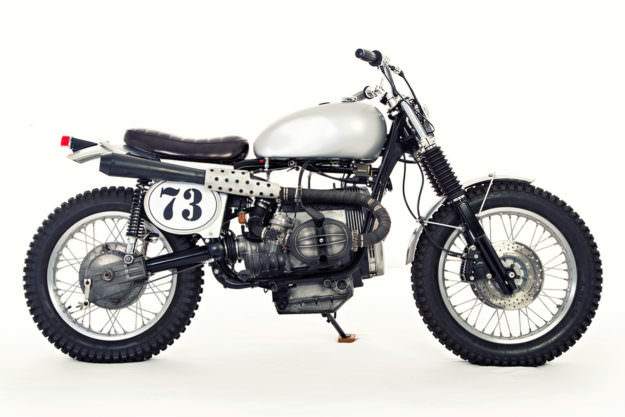 Most of the scramblers and trackers we see follow proven recipes. So this vintage trials-inspired BMW R80 RT is a refreshing twist on the dual-sport genre.

The look is more British than Bavarian, thanks to an expert makeover by Stephen Bentley. Stephen builds bikes on commission as Dust Custom Motorcycles, out of a “shack at the back” in Lancashire. But this particular bike was a personal project. 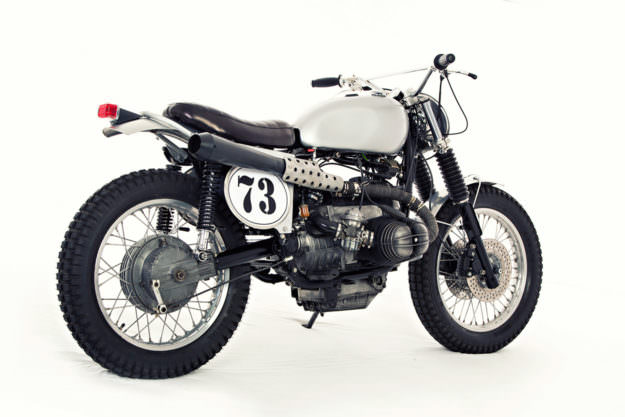 “The popularity and demand for airheads has meant that I haven’t managed to build one of my ‘own’ for two years,” he tells us. “It’s great working for people, don’t get me wrong. But to allow something to evolve without too much preemption sure helps realign things a little.”

The donor—an early 80s, low-mileage BMW R80—had been tucked away in a corner of Stephen’s shed, waiting for a gap in the schedule. In the meantime, he began gathering inspiration. 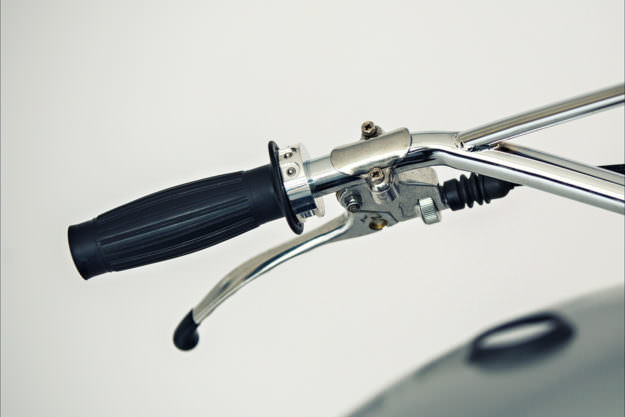 “Beyond innate screen flicking, it’s been real moments that have had the greatest impact,” he says. “Somebody sending a message through eBay saying ‘don’t bother posting the part, I’ll be there in a bit,’ only to have someone turn up an hour later wearing a piss pot, a big grin and riding a Rickman Metisse.

“Or one of those moments in the workshop when things go quiet, and I pick up on a vaguely familiar sound, cock my head to one side and see a Vincent or BSA scrambler go thundering by.” 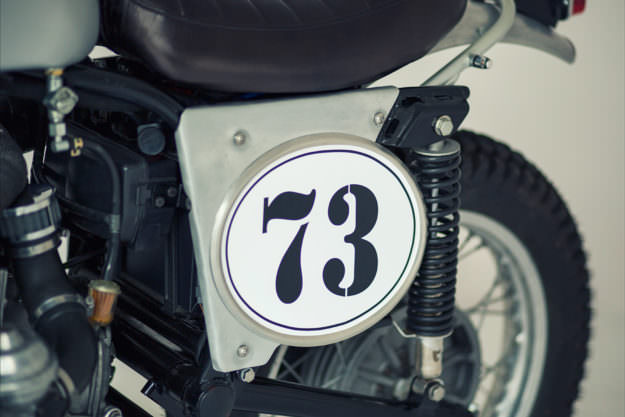 “So I had in mind from the start a typical British 60s look—Triumphs, BSAs, scramblers and trials, with simple monochromes. And I’m pretty sure I had in the back of my mind to try and place the bike somewhere between classic and custom.”

Stephen started by stripping the BMW down, liberating the frame from un-needed tabs. He axed the unsightly passenger peg hangers, and added tabs for mounting a new tank. 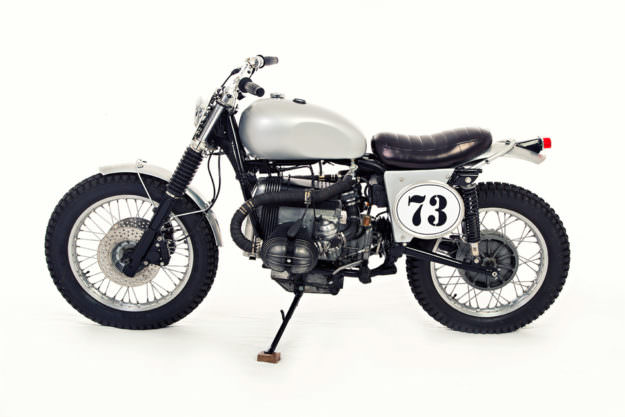 “I did a bit of scouting around for a suitable tank,” he says, “and settled on a 1974 Triumph T140 export version—quite a slim profile, and great when on the pegs.”

The R80 was pretty healthy to start off with, so Stephen left the engine and carbs stock, replacing all the cables, seals and bearings. He also left the suspension alone, but swapped the wheels for a pair of spoked, ex-police R80 items, wrapping them in Mitas trials rubber. 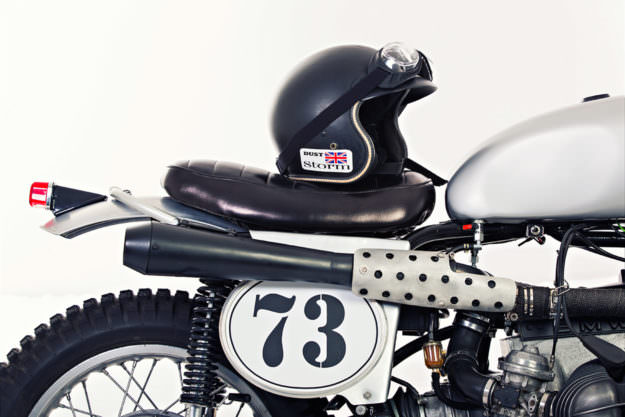 The airbox is gone, replaced by a pair of filters that have been specifically tucked up high. “There’s a bit of feet-wetting, ford-crossing fun to be had,” explains Stephen.

The exhaust’s been routed high too: “I did try low pipes at first,” says Stephen, “but figured ‘what the hell, it’s a scrambler.’ So I made up a set of stainless headers and used an aftermarket CB750 two-into-one silencer.” 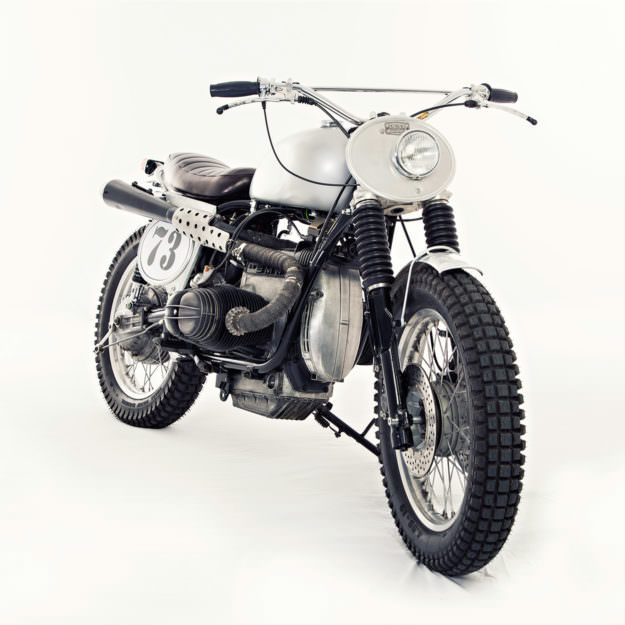 Hand-made items include the alloy number boards and fender brackets; the fenders themselves are trimmed, off-the-shelf alloy units. The back end is pretty clever: Stephen’s added a kicked-up rear loop, typical of classic off-road Triumphs. Except that this one is adjustable—so you can tweak the angle if you decide to fit different length shocks.

There’s also a custom-made inner guard keeping muck off the battery and electrics. The seat’s a one-off too, covered in Italian leather. 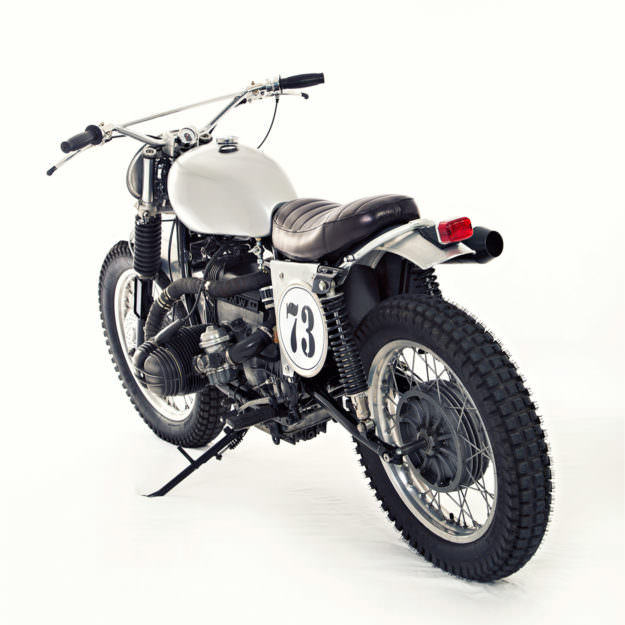 Stephen added some thoughtful—yet hidden—touches too. The OEM foot brake control is designed to loop around the exhaust, so he’s installed a neater one from a later model R100 GS. This also allowed him to tweak the foot peg placement, eliminating the stock bike’s quirky offset.

A whole lot of vintage goodness has been packed into the cockpit, starting with Greeves-style handlebars—re-worked to feel equally good on- and off-road. The levers are from Tommaselli, the throttle is a BSA part and Motogadget provided the switches and speedo. 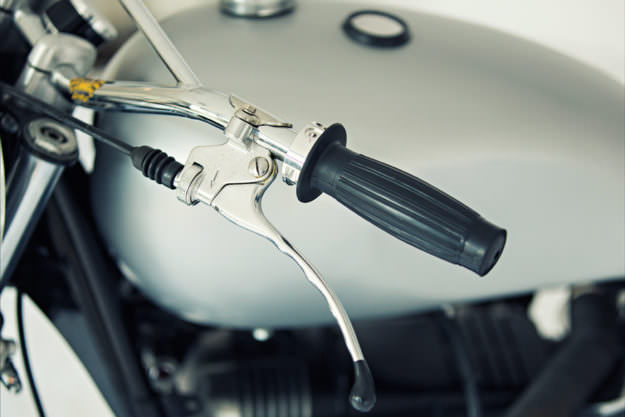 Other Motogadget bits include a m-Unit control unit and a keyless ignition. And a set of tiny pin blinkers—mounted discreetly on the front forks, and integrated into the rear loop.

Once ‘Dust Storm’ was mocked up, it was stripped for final finishing. The frame was powder-coated, then flatted and coated in high-gloss. “Rather than blast everything, I nudged certain parts the other way,” says Stephen. “The bevel, engine and rockers were painted black, then flatted with wire wool to leave residue and bring out the patina.” 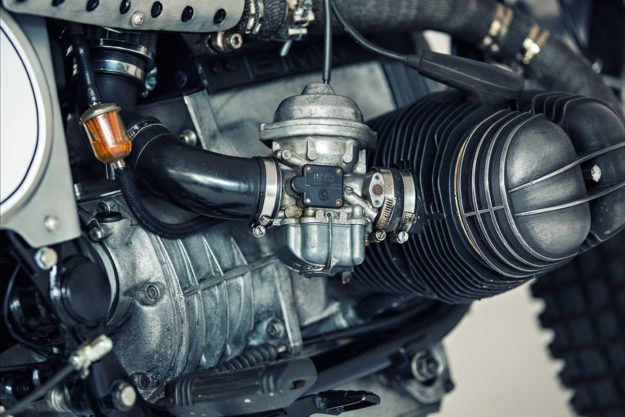 “I was going to fit an oil cooler, low sump and skid pan but figured that could happen later. As this was going to be my own ride, I thought I’d make adjustments as I went along. But as usual the well was dry, so I’ve had to sell it.”

That’s a real pity. ‘Dust Storm’ is one of the purest vintage Brit bikes we’ve seen—except it’s a BMW. Luckily, Stephen’s working on two more Beemers in the same spirit: a classic racer, and a ‘land speeder.’

We’ll report back as soon as we know more. 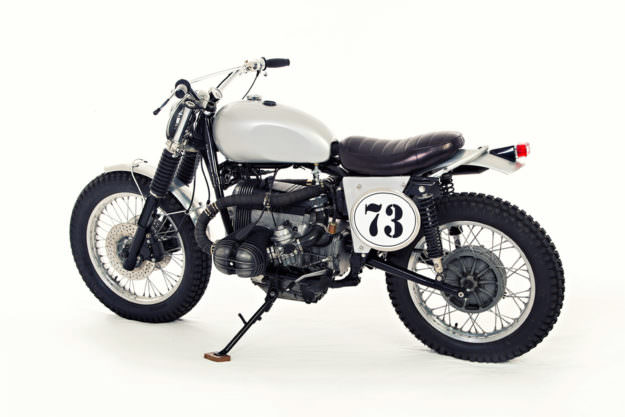