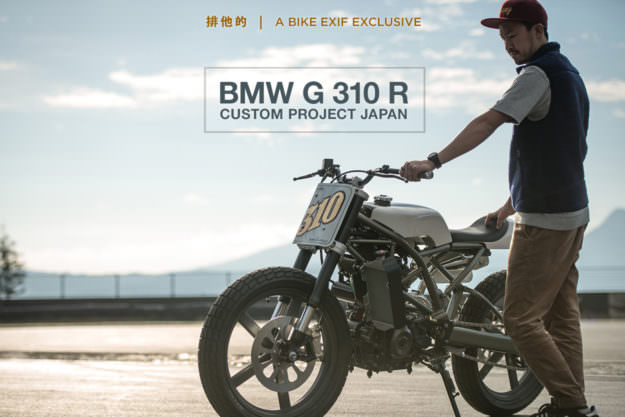 If you want to build a custom based on a current-production BMW, the top choice right now is the R nineT. We’ve also seen builders extract stunning results from sportier BMWs like the S 1000 R superbike and even the big R 1200 R roadster.

We didn’t see this one coming, though: A flat tracker based on the featherweight new BMW G 310 R. 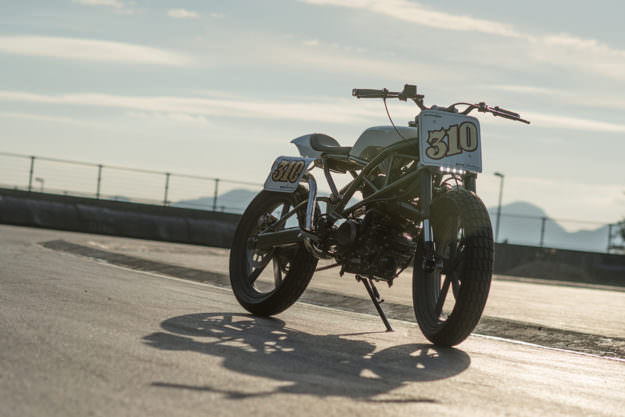 Powered by a 313cc single and made in India by TVS, the G 310 R is a sign of BMW casting its net wider. Early reports hail the compact roadster as having build and ride quality that punches far above its weight.

We’re keen to swing a leg over the little G, but never would have pegged it as a custom platform. Trust the Japanese to prove us wrong. 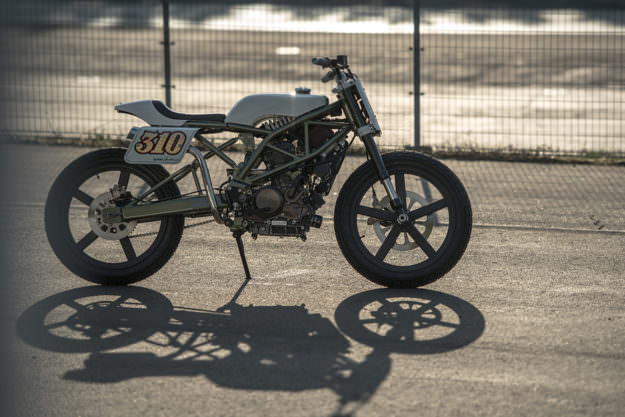 You’re looking at the work of Takashi Nihira, who is making a name for himself via his Tokyo workshop called Wedge.

Before setting up Wedge, Nihira-san worked at a car dealership as a mechanic, painter and metal shaper—so he’s able to handle every aspect of a motorcycle build. 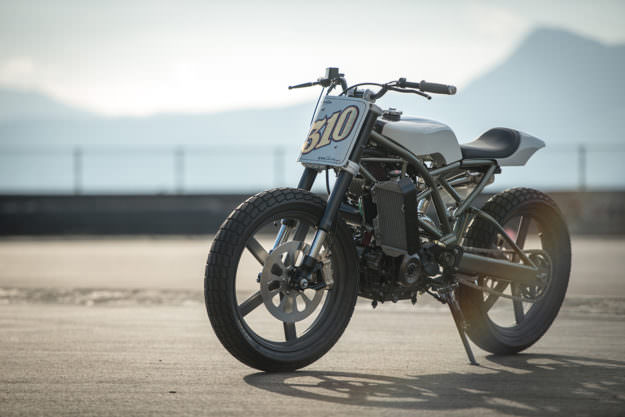 “I felt a different kind of pressure,” Takashi explains. “Usually an owner exists. To a certain degree, I know the direction of the custom bike based on the owner’s tastes and riding style. But this was difficult because I had too much freedom.” 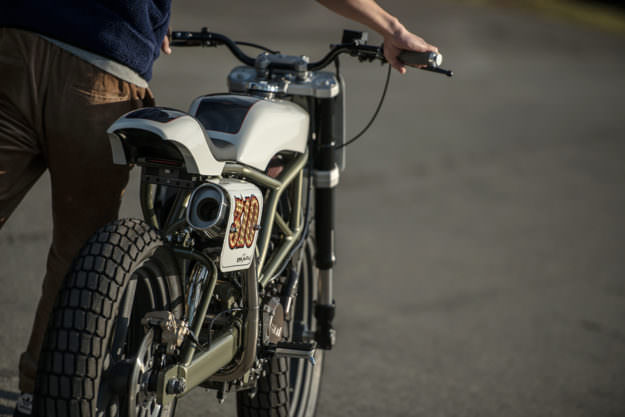 He admits that he had to stop himself from going overboard. But if this is Wedge reined-in, we’d love to see Wedge unleashed. The G 310 R’s transformation is nothing short of mind-blowing.

“My impression of the G 310 R was a standard on-road bike with 17-inch wheels,” says Takashi. “That is why I tried to customize the bike in a different direction.” 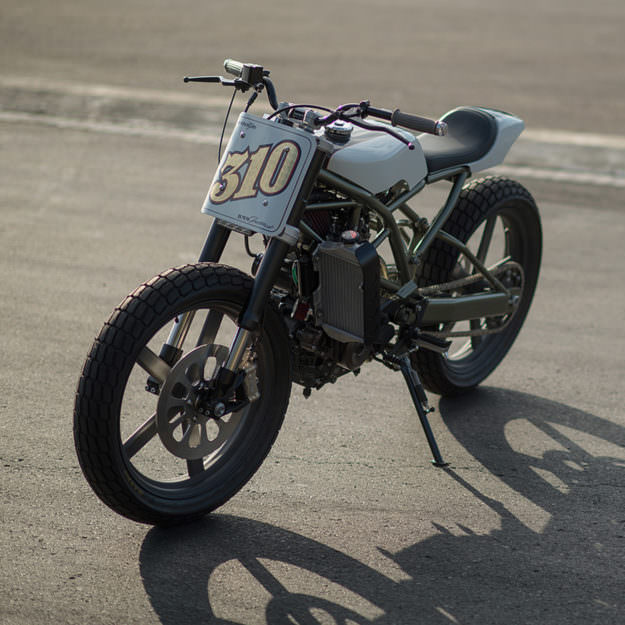 Takashi first considered building a completely new frame, but then decided that the BMW would lose too much of its identity. So he focused on the rear end—constructing a new subframe, and a new swing arm and suspension setup. The workmanship is extraordinary. 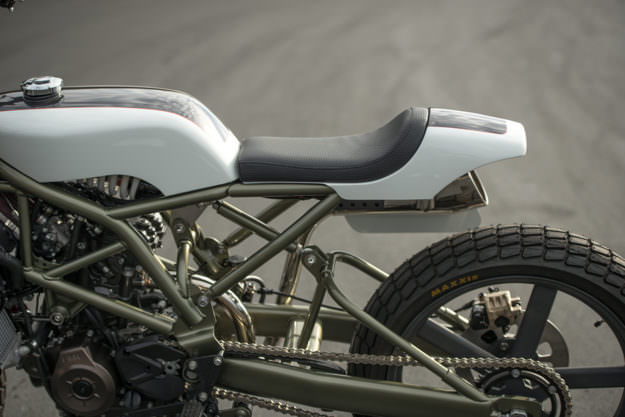 The new design still uses the original linkage, but repositions the shock right under the fuel tank. The G 310 R has an unusual back-to-front engine layout, with the intake in the front, and the exhaust at the rear. It added a little trial-and-error to the process… 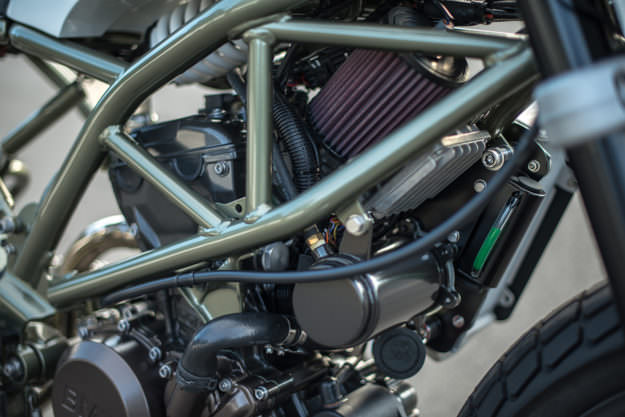 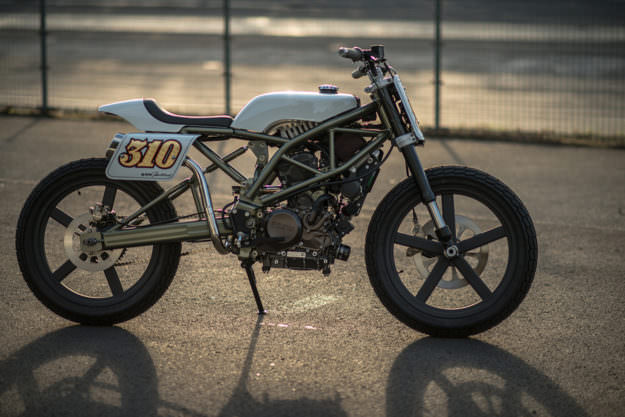 Takashi then turned his hand to shaping svelte new bodywork out of aluminum—adding a cutaway to the tank to show off the new shock positioning. The exhaust system is custom-made too; a stainless steel affair that loops around the swing arm and exits high. 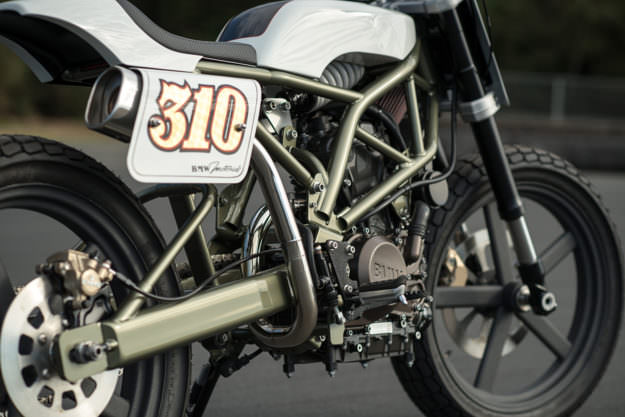 Takashi has kept stock items like the brake calipers and the 41mm USD forks—which he’s lowered a little). But the standard 17-inch wheels are gone, replaced by 19-inch steel one-offs. They’re wrapped in Maxxis dirt track rubber and treated to custom brake rotors. 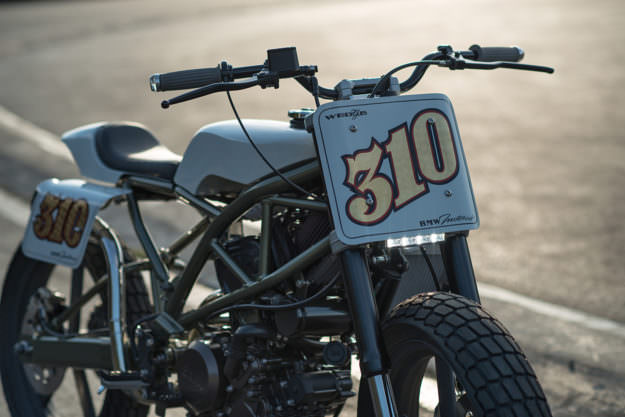 With so much of the G 310 R mechanicals exposed, a cleanup was in order. The airbox has been replaced by a K&N filter, and the battery tossed for a smaller Shorai unit. Building a new tank meant relocating the fuel pump, and Takashi has tucked it in under the filter.

He’s borrowed a smaller radiator from another bike, and mounted it off to the side with a TrailTech cooling fan kit. Up top are the original handlebars (modified), mini switches, and bar-end turn signals and a tiny LED speedo from Motogadget. LED lights at both ends of the bike cap things off. 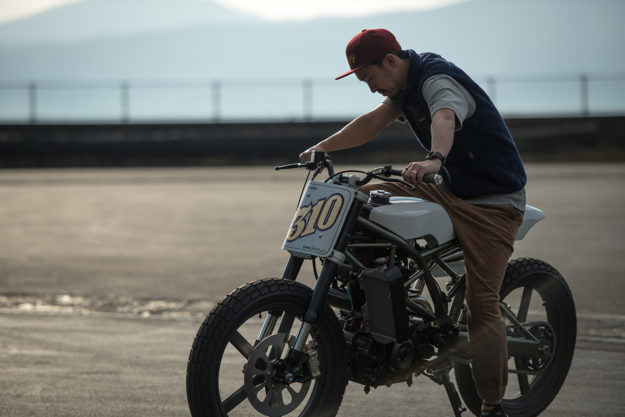 With the transformation complete, Takashi laid down the paint: olive green for the frame, and white and black for the bodywork. He completed the build in just two and a half months.

“I have never customized a bike with a front air intake device, rear exhaust and backwards-tilting cylinder engine,” says Takashi, “but this made me even more interested to take on the challenge.”

BMW have already announced a GS model using the 310 as a base. Maybe now they’ll release a tracker variant?

BMW Motorrad Japan | Wedge Facebook | Instagram | Images by Hiromitsu Yasui
With thanks to our man in Japan, Tadashi Kohno 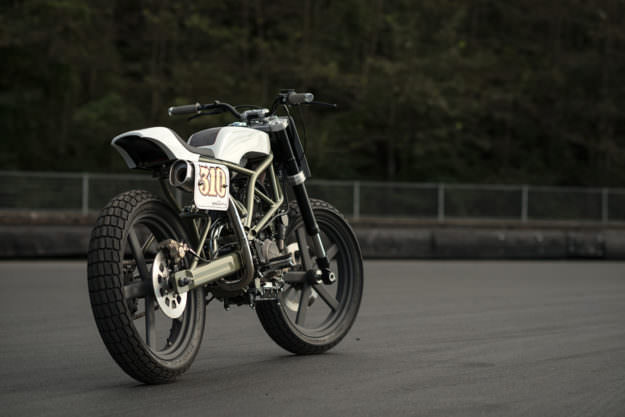